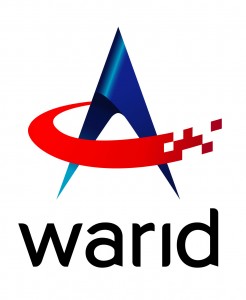 It is confirmed by simspk.com that Warid telecom, which is the only telecom company of the country that has been renounced to participate in the April 23 spectrum auction is moving on to launch the long term evolution i.e. LTE or 4G services in the top five major cities of Pakistan before the end of may 2014.

On the provision of secrecy, our resources have confirmed with the undeviating information of the subject that Warid telecom is sooner going to launch 4G services in Pakistan. It has also been confirmed by one of the top official of government of Pakistan that Warid telecom which the Pakistani subsidiary of the Abu Dhabi Group is in contact with the regulatory body of telecom sector i.e. the Pakistan Telecommunication Authority (PTA) to launch 4G services in its already existing network.

The amazing fact in this regard is that Warid telecom is launching 4G services in Pakistan without having a 4G or LTE spectrum from the Pakistan Telecommunication Authority (PTA).

Warid telecom has a incredibly low down subscriber base which is even less than 10% of 132.3 million cell phone subscriptions of Pakistan since January 2014. Therefore, around 50% of the Warid network stays unutilized that gives it the ability to grasp further traffic on the similar network. Furthermore, Warid telecom by now has a bandwidth of 8.8 megahertz (MHz) in the spectrum of 1800 MHz. it is the identical frequency which is choose by the Pakistan Telecommunication Authority (PTA) to roll out 4G services in Pakistan.

Warid just need to carry out ‘Re-farming’. It is the process in which Warid just needs an official consent from its supervisory body to launch 4G or LTE services on its existing network because Warid has the technology-neutral license.

It has been stated by one of the official, “Warid would have declared their plans to launch 4G services on the auction day, had the PTA approved their application. The response of PTA has been hopeful and it’s predictable that in a little while after due approvals from the previous, the company will be testing 4G services on its network most probable by the end of May as PTA needs time to vend the unsold spectrum before it could furnish a go ahead to Warid.”(We can’t disclose the name of official here as he is not authorized to reveal the information).

Although the launch of $g services in Pakistan by Warid depends on the approval by PTA, yet it is expected that the 4G service by Warid will be introduced more or less at the same timeline as that of Zong. Zong is the only fortunate telecom company which was able to acquire a 4G license and it is like to gear up 4G services in Pakistan very soon.

The official further said, “Warid is in concluding talks with all the principal Smartphone brands in Pakistan for 4G-supported handsets. These brands include the authorized resellers of HTC, Nokia, Samsung, Sony Ericson, Google Nexus, LG, Apple & Huawei”.

According to the same official, “dongles, USBs & Sample handsets have been bought for testing 4G services in various locations”. The Huawei cloud is also considered as an option because it receives 4G signals and can convert them into Wi-Fi.

The official further said, “The Company is anticipated to launch a trade program too, to substitute existing handsets with the LTE or 4G handsets. The orders had been placed with existing vendors for 4G Sims and testing is in progression”.

Is has also been confirmed by a top government official that Warid telecom has the necessary license to set up 4G services but insisted that the company would have to hold on to the rules and regulations put for operation of these services. He concluded, “The Company would have to obey with the PTA’s obligations for technology roll-out, network quality and legal cut off observance.”

The hardware of Warid telecom comes from on the top equipment makers of telecom world i.e. Sweden-based Ericson. It means that Warid telecom is the only company having a 100% backend support from a European retailer. Warid telecom has an improved quality for its recent Edge technology which is a result of the network enhancement done in 2012.

When we asked that would the outreach of company be restricted by switching to 4G or LTE network, the official answered, “Warid has been an urban-centric cellular service provider and it will most likely keep on this policy”.

The official said, “The publicity surrounding the acquirement of Warid has died down previously and it has performed greater than industry average i.e. in terms of sales during the last 6 months. This rebuilt interest of investor in the company that would promise more venture towards communications promotion if need be”.