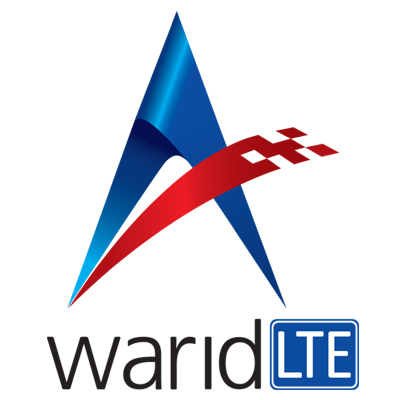 According to Warid telecom, all its customers living in the above listed 6 locations will be given with free 4G LTE trial by Warid for 1 week after the commercial launch. After 7 days trail period, Rs. 5/MB will be charged for all mobile internet data transactions.

After starting 4G trials in November 2014 for postpaid and corporate customers of the company in Pakistan, Warid announced 4G trials for prepaid users too at the starting of December 2014. Now Warid officially launches its 4G LTE services all over Pakistan. It is also expected that in few days, Warid will also bring exciting affordable Warid 4G internet bundles for its users.

Warid has already acknowledged its 4G LTE users about the closing dates of Warid free 4G LTE trials. The notification about the end of Warid LTE trials as well as tariff charges of mobile internet usage on Warid 4G network is spread among Warid 4G customers by means of SMS messages, automated calls and emails. See the given screenshots for instance: 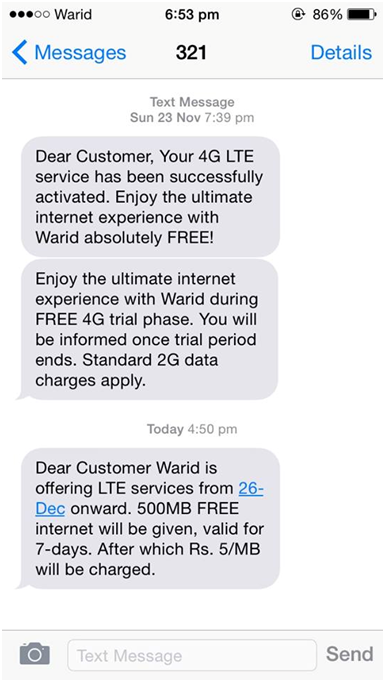 The CEO Warid Telecom, Mr. Muneer Farooqui, commented on the launch of Warid LTE network in Pakistan and said, “Over many years, Warid Telecom has developed a status for breaking latest view in Pakistan’s mobile background. We have at all times remained at the front position of innovation: our verdict to convert directly from 2G to 4G LTE technology is a sign of this fortitude of improvement. With this move, Warid becomes the first mobile operator in Pakistan to transform directly from 2G to LTE technology. Moving forward to 2015 and further than, we will keep on to spend in best technologies and network communications to make sure service distinction to our patrons who have always held us close to their hearts. Warid is investing around US$500 million over the next five years to expand its network across the country. I am certain that with the belief and faithfulness by our customers, Warid Telecom will go up to astral heights within this new telecoms model.”