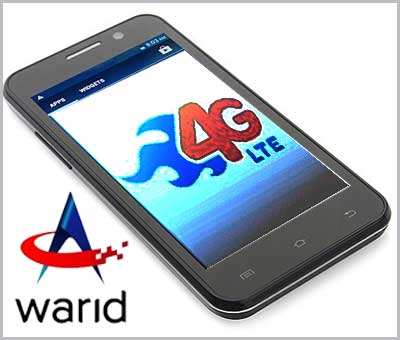 Warid telecom has finally announced its customers about the 4G LTE launch in Pakistan. It is recently confirmed by Warid telecom that it will launch its 4G LTE plans in September 2014.

As Warid did not participated in the 3g, 4g auction in Pakistan therefore, PTS was not happy with Warid’s decision about the launch of Warid 4g LTE plans in Pakistan. During last week, Warid finally proved its commitment with its customers by going public and the confirmation of 4G LTE launch in Pakistan in September 2014.

A letter is published below that Warid sent to its corporate customers:

Warid has a long and successful history of staying a step ahead in the telecom industry in providing the best and the most innovative services to our customers. We have always focused on creating the most reliable network in Pakistan as we continue to enhance the quality cellular services.

Keeping up with our promise to provide state-of-the-art technology to our customers, we are currently upgrading the network to 4G/ LTE (Long-Term Evolution) which is the most advanced mobile communication technology available globally.

The 4G/ LTE technology evolution will be able to provide the most advanced data services and a richer data experience will be available to our customers by September 2014.

Warid has contracted Ericsson, the leading global vendor in provision of 4G/ LTE infrastructure, as its technology partner to ensure steady and quick roll-out of these services. Through this network upgrade, we will further improve what is already considered to be an enjoyable network experience by our customers to complement our seamless voice connectivity.

The Management and Shareholders of Warid Telecom would like to thank its patrons, the customers and the business partners, for exhibiting their patience and having faith in our promise to deliver the best technological solution of voice and data services.

Not only this. Warid also sent a text-broadcast to its entire customer-base in which it confirmed the availability of 4G services soon.

Check below the screen-shot of the text message that Warid customers received: 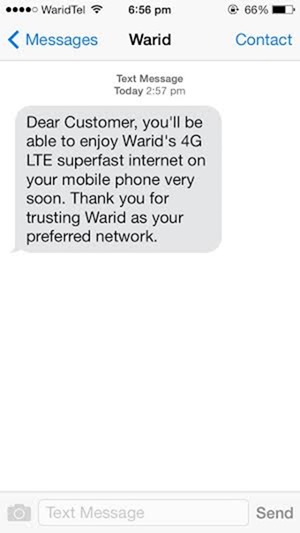