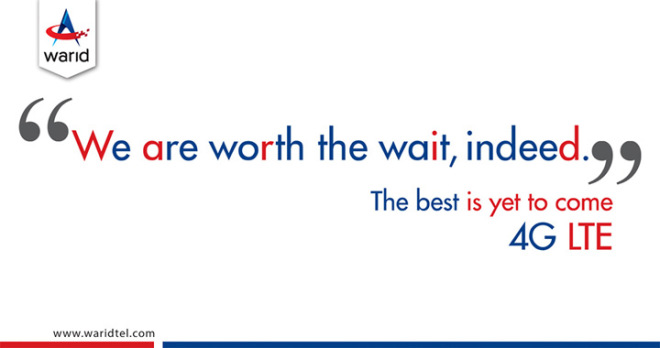 Warid sent an SMS broadcast to all of its customers and partners:

“Dear Warid Family Member, the announcement regarding our new data technology would be made soon. Your wait is worth the while as the best is yet to come!”

Just prior to the 3G auction in Pakistan, a similar communication had been made by Muneer Farooqi, CEO of Warid telecom, to all of its business partners and employees.

Now, we are in a predicament that which telecom company will launch first 3G and 4G services in Pakistan. In this regard, Zong has already announced that it needs a period of more or less 1 year to start its 4G services nationwide. So it is a possibility that Warid can win this chase of launching 4G service firstly in Pakistan. Let’s see what happens, whether Warid would be able to be the one or Zong would not be the only 4G operator in Pakistan even after paying millions of dollar to the government.

We are also anxious to find the answer that whether Pakistan Telecommunication Authority (PTA) would allow Warid telecom to launch 4G service in Pakistan before Zong who has officially participated and won 4G license in the next generation spectrum launch. Stay in touch with us to find latest updates on this topic.