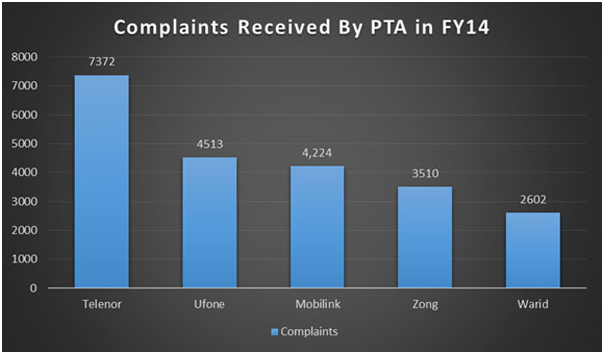 PTA has recently released the annual stats filled report for the year 2014 which shows that Telenor has consistently remained the worst cellular network for its customers. this report clearly deals with the consumer protection part and reveals that PTA received thousands of complaints against cellular mobile operators (CMOs) in 2014. On the close analysis of this report, it is concluded that the maximum number of complaints were made against Telenor.

Telenor became the worst cellular network of Pakistan in 2014 as said by PTA and also verified in its annual statistics report. According to that report, 7372 consumers recorded their complaints against the company. It makes around 33% of the total complaints that are registered against the Norwegian operator.

Check below the Graph of Annual Stats Filled Report 2014 that is clearly showing the number of complaints recorded against each cellular mobile operator of Pakistan:

On behalf of the market share statistics, Mobilink has the highest market share i.e. 28% while Telenor has 26%, Zong has 20%, Ufone has 16% while Warid has 9% market share of the total.