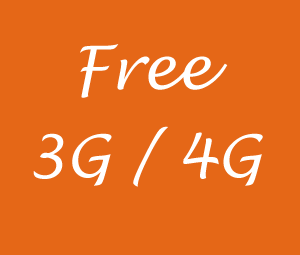 All the 4 major telecom operators of Pakistan i.e. Zong, Ufone, Telenor and Mobilink are offer free 3G and 4G trials to their customers in different regions of major cities of the country. Either because of data cap or technical glitches that are yet not communicated to the consumers, these seemed-free 3G & 4G services are being charged by the customers.

Due to the loss integration between technical and billing department that is not settled up till now, some of the Telenor customers have been charged for using so called free 3G trial service (as reported by simspk.com). According to this report, if any active 2G (GRPS/EDGE) user moves to 3G spectrum then, he/she will exorbitantly be charged for using 3G network.

Similarly, at the time of announcement of free 3G trial by Ufone, Ufone dint communicated or advertised to its customers about the data limit using of 500 MB. Is the customer crosses this limit hen automatically he/she will be charged for using internet data according to the 2G data package that has already been subscribed by the customer.

As if a customer downloads internet data in 3G spectrum then it will obviously be much faster as compare to the GPRS/EDGE spectrum. So, it may be a reason why the data which is consumed will be much higher and therefore, the charges will also automatically be higher.

Here, prepaid customers have got an advantage because their losses will be considerably lesser than the postpaid customers because the credit limit of postpaid users is on a higher side. Users of Zong and Mobilink have very less amount to lose because their services are not available easily as that of Ufone customers. Mobilink and Zong have not yet announced their 3G and 4G coverage areas in Pakistan.